Get ready to test your skills and earn bragging rights as a true fisherman in one of the most interactive and addicting fishing games anywhere.  Let the fun begin with a flick of your wrist as you cast out into fresh water using your state of the art spinning rod, specially designed for sensitivity and accuracy. Next, slowly reel your bait in as you track fish in their natural habitat by utilizing the underwater radar system to hook fish such as the wide mouth bass, the channel catfish, brook trout, long nose garr and much more. Each fish presents its own level of difficulty; so once a fish has been snagged keep your fish from escaping or breaking the line as you work to land it.

BabyViz is a “unique bonding activity for parents and their infants” by setting high-contrast, black and white images to traditional classical music. Over 100 original images, from playful animals and letters to bold geometric shapes and scenes, were artfully created to be developmentally and age-appropriate. These images, placed on a three-second timer and scrolled left to right, are expected to stimulate eye-tracking development and introduce the early reading concept of “directionality”.(SPACE) In addition, classical music selections were included in the development of BabyViz in hopes to boost “spatial-temporal reasoning,” a critical thinking skill used to generate and conceptualize solutions to multi-step problems in areas such as math and science.

Snackster, as part of the YouZeum, is an interactive which resembles a vending machine. The snacks inside come to life as the users make selections and are presented with challenges. I managed the project and worked on graphics, animation and voice-overs. 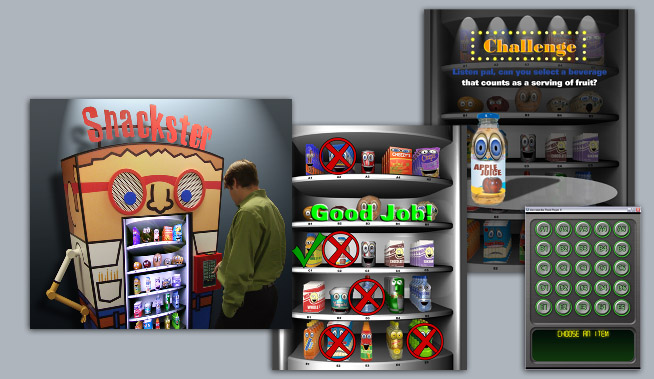 The Brainasium is a set of educational games where users “exercise” their brains with a series of puzzles and tests that challenges memory, perception and attention. I managed the project and worked on the interface and graphics. 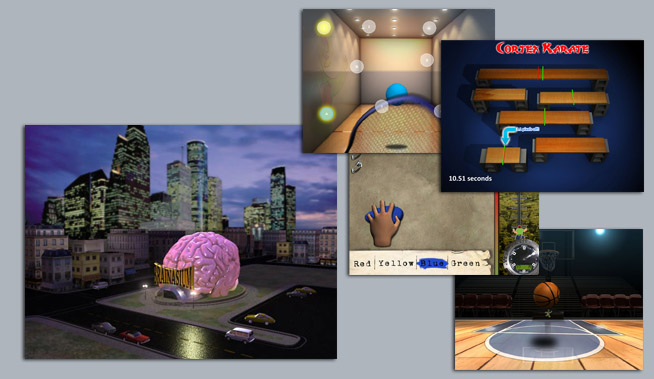 The power plant interactive, as part of the YouZeum, teaches users the importance of a healthy diet full of phytochemicals through a comic book super hero style video and game. In the game, users load a spaceship with disease battling phytopower by choosing healthy foods. I managed the project and created the superhero characters. 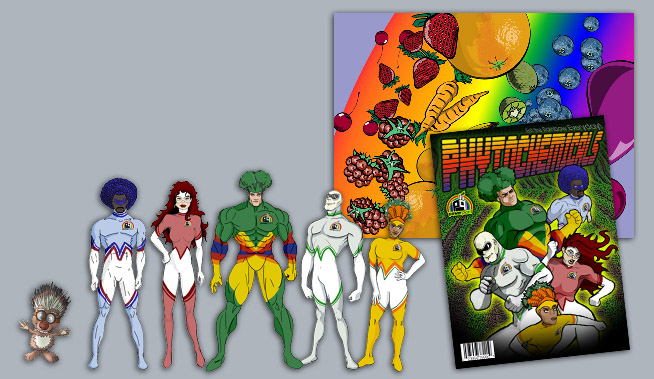 The Harlem Renaissance 2001 (HR2K1) kiosk takes the visitor on a tour of Harlem as it was during the late 1920’s and 1930’s. .HR2K1 is both a navigation demo and a music game created for the Children’s Museum of Manhattan. I managed this project and was the lead designer. 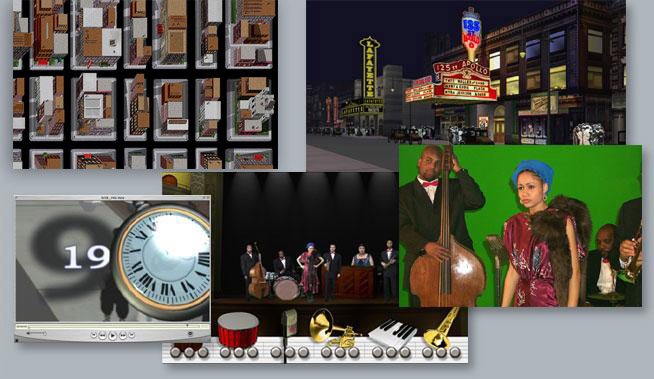 Earth 2U, Exploring Geography helps put the “me” element back into geography through hands-on fun for kids: things to lift up, turn around, touch, and smell; computer interactives to play with and explore; an educational video to watch; and amusing text that asks questions, tells stories, and teaches facts, skills, and history. Earth 2U, Exploring Geography was organized by the Smithsonian Institution Traveling Exhibition Service and the National Geographic Society. The exhibition and educational programs have been made possible through the generous support Nissan North America. As part of the design team, I assisted in the storyboarding, design and creation. 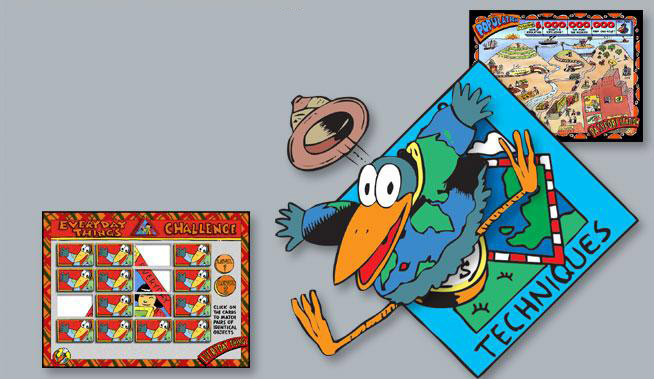 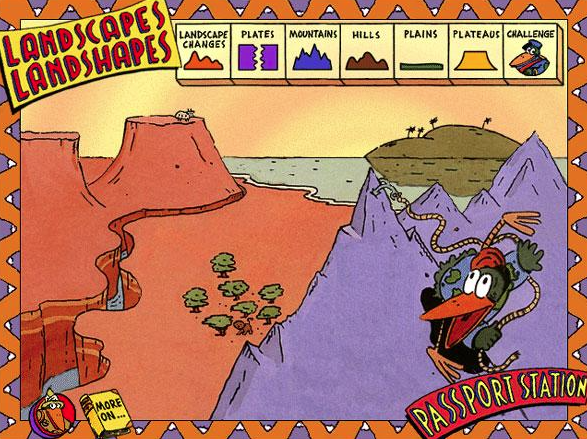 This presentation visualizes several scenarios for an interactive exhibit in the National Underground Railroad Freedom Center. It also includes information on other projects created by the Emerging Technologies Group. I managed and assisted with the development of the prototype and presentation. 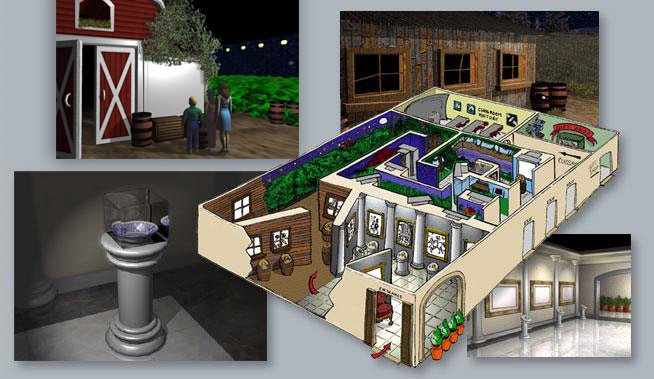 The Cyberville Web Page Factory allows visitors to create a webpage and view it on the World Wide Web from any networked computer. This kiosk not only teaches users how to make a Web page using Hypertext Mark-Up Language (HTML), it also gives the user a “cyber-souvenir” of their visit to the museum. As part of the planning team, I supervised the development of this project and managed the design team, in which I served as the lead designer. Most 2D graphics were created through pen and ink drawings along with Photoshop. This interactive kiosk installation was created for the St. Louis Science Center, according to the Association of Science and Technology Centers, is one of the top 5 science centers in the United States. 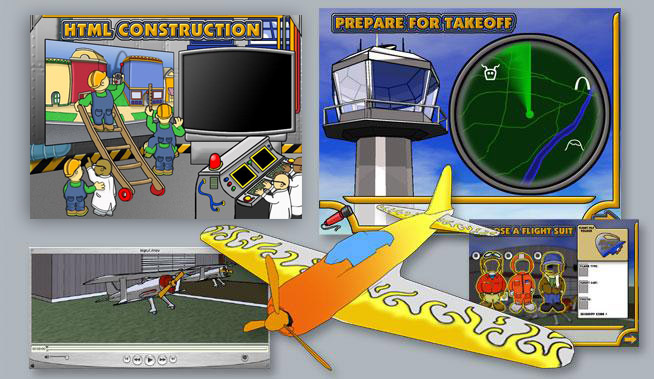 In Cyberville, three players are invited to build a structure in a collaborative environment. For example, a player is unable to complete his/her task until the other players have finished. To promote collaboration the players are urged to communicate by sending electronic messages to one another. As the manager of the project I served as the lead designer and worked with a creative team on programming. This interactive kiosk installation was created for the St. Louis Science Center, according to the Association of Science and Technology Centers, is one of the top 5 science centers in the United States. 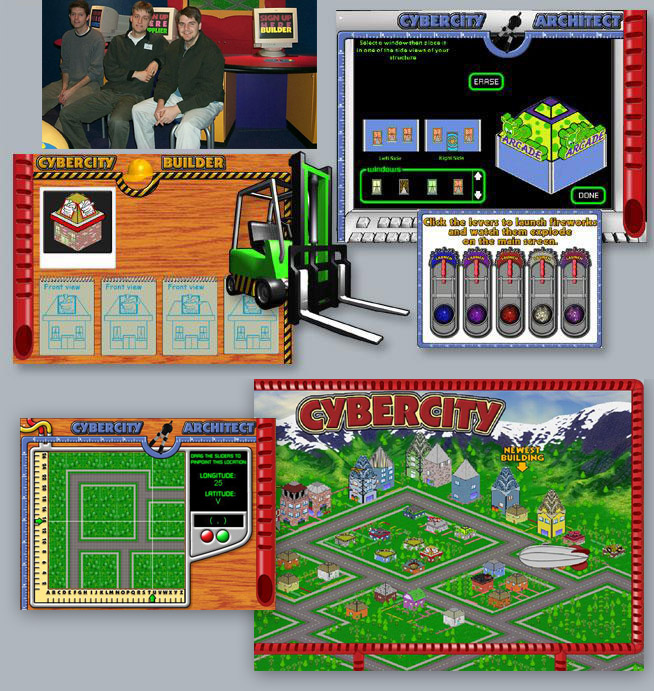 The Bike tail challenge, as part of the YouZeum, teaches users to be aware of their heart rate as they exercise. Users can race each other in actual recreations of trails located in and around the Columbia, MO area. I managed the project and worked on graphics for the game. 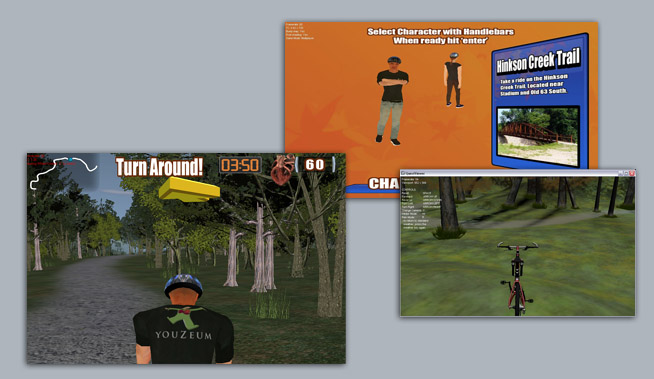 The VR Bio Lab offers an interactive simulation of real laboratory processes to help instruct students on the process of photosynthesis in plants. This is a fully developed prototype developed in support of an application to the National Science Foundation. As part of the design team, I created storyboards and 3D graphics necessary for this prototype. 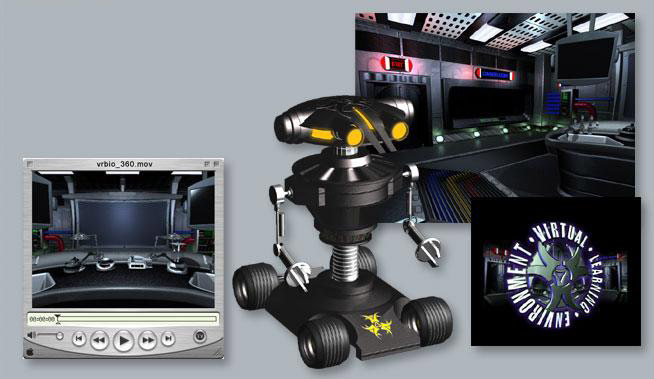